From parents whose children have stayed with us over the years – and the children themselves: 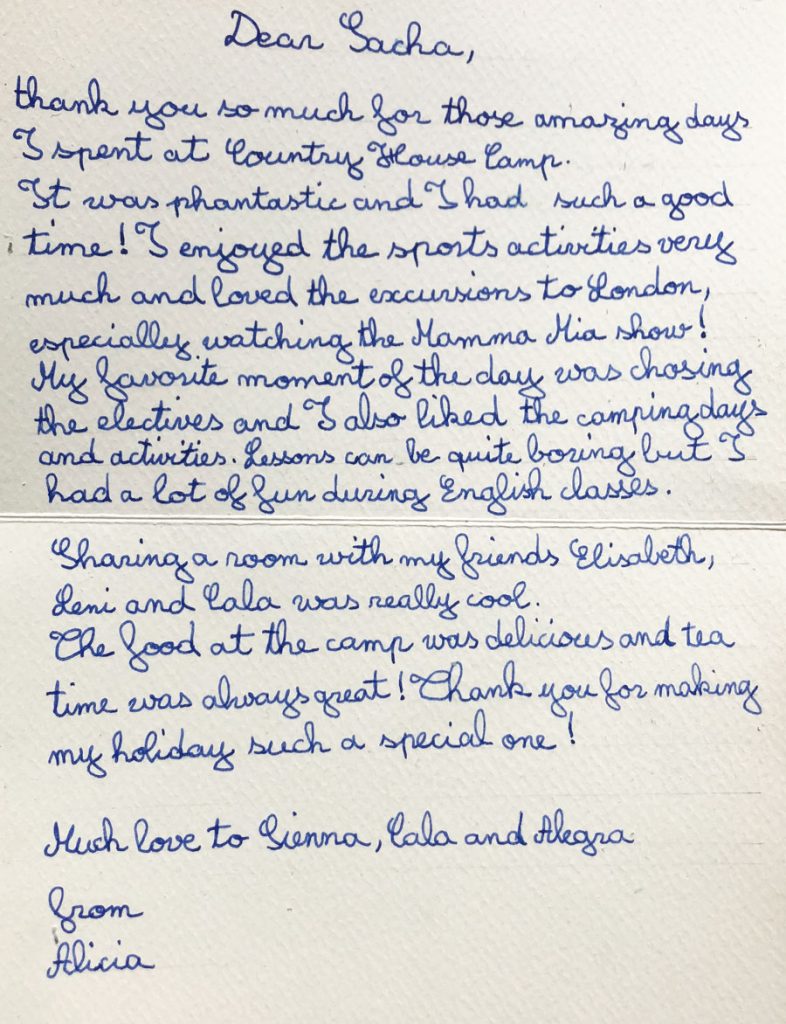 “What can I say? Another year, another happy girl that only talks about CHC!” BC

“I just wanted to say thank you once again SO much, and to congratulate you for the amazing camp you’ve organised for the girls.  Casilda came back so happy, she had the best time, made loads of friends, and has enjoyed herself so much. She loved all the activities and all the members of staff!  LA

“Great pictures! It seems amazing, the girls have such a happy face!”  SA

“They learned more in two weeks than in two years.  You sent our girls back to us as artists, sportswomen, singers… Non stop! Maybe I won’t need to send them to university if I carry on sending her to summer camp!! Beatrice

“This is a unique camp.  They had such a great time, we want to come too!” Eva

“It was great to talk to Katinka! And we do not have to worry! She was totally relaxed and joyful. When I asked here, what was best so far, she said riding, the trip to London, everything! We couldn’t asked for more!!! Svenja

“Paula arrived so happy. She won’t stop talking about all the things that she did, the amazing food, and all the dogs that she used to be afraid of and now loves!” Chiara

“I think it would be hard to find a better English experience for our child.” Athenais & Maxime

“I thought this was an excellent choice for our daughter. Being so little, we were worried she might have a difficult time, but the first thing she said when home was “Can I go back next year?” Ania & Alexander

“When my daughters go through something that I find special, I like to ask them how they’d rate it.They said camp was a 10!” Marya

“She can’t wait to go back! Thank you for an incredible experience!”  Philippe